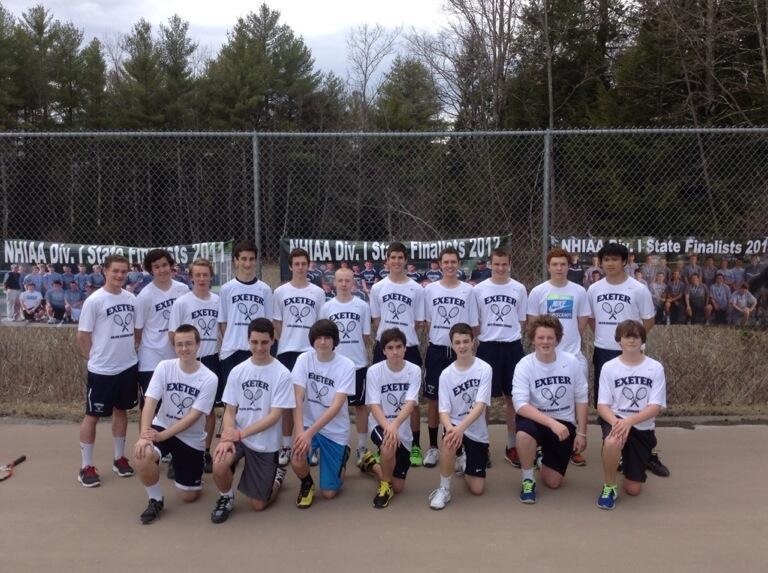 After losing 4 Varsity starters from the 2013 State Finalist team, Exeter had many holes to fill going into the 2014 season.  With only 2 returning starters, it was difficult to predict the upcoming 2014 season.  But with strong play from 3 freshmen and 1 junior, Exeter was able to remain one of the best teams in Division I tennis.  Exeter finished the year an impressive 12-3 and was able to gain the #3 seed in the tournament.  Exeter’s #1 doubles team of Ty Cloyd and Cam Maher also qualified for the NHIAA State Doubles Tournament.  This season was about the growth of a young team being led by two seasoned players.

Freshmen Cam Maher led the team in singles wins, total wins, and was awarded MVP for the season.  His 24 wins is the highest total for a freshman in the past 5 seasons.  Cam had multiple great wins this season, including singles victories over Winnaunnet, Concord, and Bedford as well as doubles wins (w/Ty Cloyd) over Concord and Bedford.

Freshmen Tucker Guen and Eric Schleicher joined together at #3 doubles and went 6-2, including two thrilling matches vs. Concord and Winnacunnet.  Both matches went to tiebreakers with Guen/Schleicher winning the 5th point in a 5-4 win.  Both players won over 17 matches this season.  Guen won the best bounce back victory with his singles win over Concord in the playoffs and Schleicher was award Unsung Hero Award for his steady play at #6 singles.

Junior Marc Cochran also awarded the Unsung Hero Award with his strong singles and doubles play.  After getting some match experience in the early part of the season, Marc played great down the stretch including winning two points vs. Concord in the playoffs.  For these 4 players returning, Exeter is in good shape to return to the playoffs again.

Senior captains Ty Cloyd and Chris Lietz finished their great careers at Exeter being the top two players in singles wins, doubles wins, and total wins.  They had a combined 56-10 record in their four year careers, playing in three State Finals.  They were both excellent leaders this year to a younger team and will be greatly missed next season.

Clutch Performance of the Year

#2 All Time in Singles, Doubles, and Total Wins